The 35-day budget impasse caused “real harm” to taxpayers, according to a new IRS watchdog report.

In December, the IRS was already bracing for an especially challenging tax season when the partial government shutdown gutted its workforce, sending the agency into a tailspin, according to a report released Tuesday by the agency’s internal watchdog group.

The 35-day shutdown significantly affected several federal agencies including the Treasury Department, which houses the IRS. The budget impasse ― the longest in U.S. history ― added to the agency’s existing backlog and resulted in “real harm” for taxpayers, according to the 2018 National Taxpayer Advocate’s report to Congress, issued by the Taxpayer Advocate Service.

“The five weeks could not have come at a worse time for the IRS,” National Taxpayer Advocate Nina E. Olson wrote in the annual report. “Make no mistake about it, these numbers translate into real harm to real taxpayers.”

The shutdown began on Dec. 22. Funds for government agencies allotted in a previous spending bill ran out and President Donald Trump had vowed to veto any new spending bill from Congress that it didn’t allocate $5.7 billion toward his long-promised wall along the U.S.-Mexico border, which Democrats had steadfastly declined to do. Ten days later, tax season began.

Having to implement the massive new tax law pushed by Republicans, along with a completely restructured tax form, already presented IRS workers with new challenges this season, Olson wrote in the report.

“The IRS was already in a position of entering the filing season with a backlog of items and with its resources stretched thin,” she wrote.

The IRS considers tax season to last from Jan. 1 to April 30. In the early days of the shutdown, tax season had not yet begun and the IRS furloughed the vast majority of its roughly 80,000 workers. Less than 10,000 workers during that time period were deemed essential and worked without pay.

The five weeks could not have come at a worse time for the IRS. … Make no mistake about it, these numbers translate into real harm to real taxpayers.

As the shutdown stretched into January, the IRS released a new contingency plan ordering over 46,000 workers to work without pay amid tax season. Most Taxpayer Advocate Service employees, including Olson and the rest of the annual report’s staff, were furloughed, severely hindering the group’s ability to help taxpayers resolve their problems with the IRS.

Trump agreed to end the shutdown on Jan. 25 but said he would close down the government again or declare a national emergency to secure funding for his border wall if negotiations between Republicans and Democrats failed by the new Feb. 15 appropriations deadline.

A day before the shutdown ended, the Taxpayer Advocate Service determined the IRS had over 5 million pieces of mail that had not yet been processed, as well as 80,000 responses to tax credit audits that had not been addressed and 87,000 amended returns awaiting processing. Because the shutdown caused a backlog of tax form requests, the IRS suggested that employers consider requesting filing extensions.

The IRS entered tax season “inundated with correspondence, phone calls, and inventories of unresolved prior year audits and identity theft cases,” Olson wrote in the report.

What’s more, Olson wrote, taxpayers were clearly hurt by the shutdown’s kneecapping of the IRS’s workforce. No IRS employee was excepted during the shutdown to release or withdraw liens or release levies.

“With respect to notices of levy, if the taxpayer cannot contact the IRS and make other payment arrangements within 21 days of the issuance of the levy, the employer or financial institution must pay over the funds to the IRS,” according to the report. “The 21-day period for over 18,000 levies expired during the shutdown.” 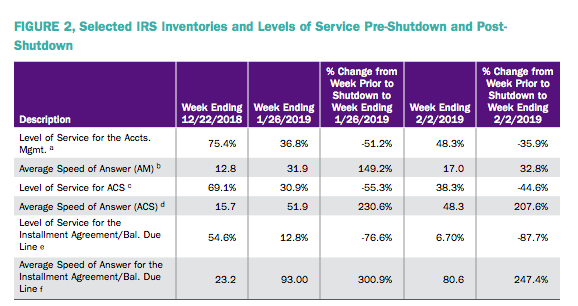 By Feb. 2, the end of the first week after the shutdown ended, most phone line levels slightly improved with one exception: the Installment Agreement/Balance Due phone lines answered just 6.7 percent of calls.

“This means for that week 93.3 percent of the taxpayers calling to make payment arrangements were unable to speak to a live assistor,” Olson wrote.

Another shutdown looms as the Feb. 15 deadline approaches for another government funding bill ― which Trump has said must contain an agreement on border security spending between Democrats and Republicans. In her report, Olson recommended Congress “at the very least” exempt certain IRS workers from being furloughed or ordered to work without pay during future appropriations lapses.

The shutdown created a lot of anxiety for IRS employees as a result of missing two paychecks, Olson noted.

“Some employees could not pay their bills and others were deeply worried they would miss payments if the shutdown continued for much longer,” Olson wrote. “Yet when the shutdown ended, IRS employees returned to work with energy and generally hit the ground running, eager to make sure the agency could deliver the filing season as well as achieve its broader mission.”

She added: “The IRS faces many challenges as an agency ― and this report documents many of them ― but the dedication of the IRS workforce is a notable bright spot.”

IRS employees weren’t the only federal employees affected by the recent shutdown. Over 800,000 workers were furloughed or, if deemed essential, ordered to work without pay. Many government contractors ― estimated to number in the hundreds of thousands if not millions ― went without work.